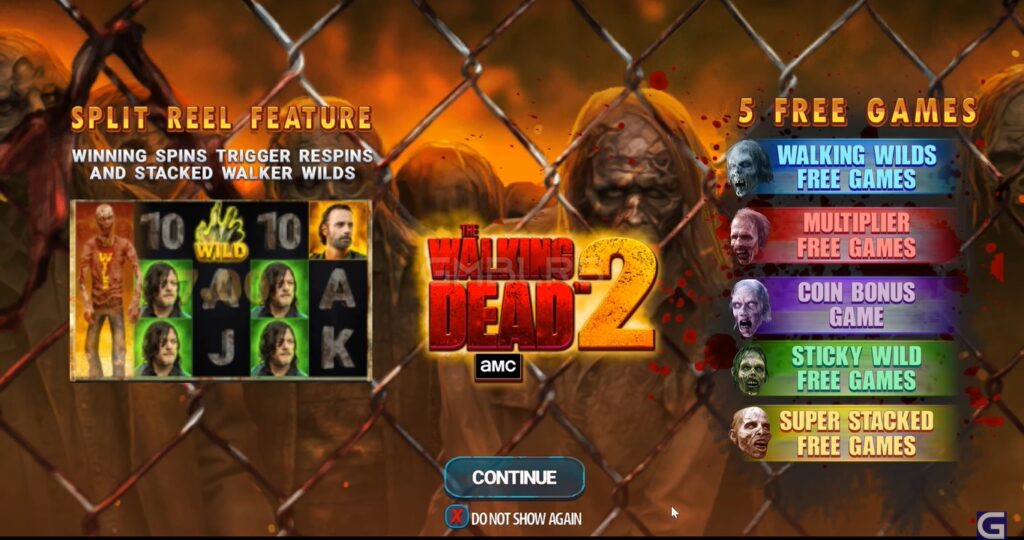 The Walking Dead, the TV show on which this slot machine is based, has been on the air for a long time and is now in its 11th season. The Walking Dead 2 is undoubtedly the second slot from Playtech to be based on this universe, while Aristocrat has already released two additional games with the same name. The second game has made some noticeable changes, especially when it comes to the top prize, but more on that in our review below.

The Walking Dead 2 is a video slot featuring 5×3 reels and 25 paylines. I believe you will agree on one point: the 5,000x jackpot appears to be highly attractive, especially given the combination of medium volatility and a 95.84 percent RTP. Hand Wilds, Van scatters, Wild Walkers, wild multipliers, free spins, and a Split Reel mechanism are just a few of the notable features.

The Walking Dead 2 is a simple to play slot machine that can be played for as little as $0.05 per spin. Much greater stakes are also possible, with $500 each spin being one of them.

In this game, the biggest jackpot might reach 5,000x. Hundreds of games will perform similarly, if not better, and that’s just from the new slots added each year. However, much fewer will go that far, and volatility will be kept to a minimum. Because of the game’s mild volatility, the top prize looks a lot better.

I’m also satisfied with the RTP, albeit at 95.84 percent, there is space for improvement.

Features of The Walking Dead 2 Slot

Split Reel, a new element in The Walking Dead 2, is an intriguing one. It activates once winning combinations have been generated. It does this by shifting the symbols from one of the initial three reels to the right, then respining that reel. Additional combinations may arise as a result of the new symbols that appear on that reel. There’s also a chance that a Wild Walker will come and cover the entire reel.

Regular wilds have the image of a zombie’s hand on them. These pay up to 20 times the stake per line that they take over, although it’s considerably more likely that they’ll be beneficial as a replacement (only for the regular symbols though).

Wild Walkers are stacked symbols that can take up the entire reel.

Van Scatter symbols must occur three or more times in a single game to activate the free spins. Then, with 2+ scatters, you can retrigger them.

There is a choice of many types of free spins at this point, but the one you get is determined by a random selection mechanism. The long-term odds are the same, but the volatility is different.

It looks pretty well for a branded slot machine. They’ve managed to add photographs of five of The Walking Dead’s biggest characters, and those will presumably be the high-paying symbols. The other five symbols are basic Royals that are filthy and metallic in appearance. If you’re a fan of the series, I think you’ll like the design.

The Walking Dead 2 is one of many branded slot machines based on television shows, but if you’re a fan, it’s a must-play title. It has a good appearance, is accessible because to its modest volatility, and I considered the rewards to be above average.