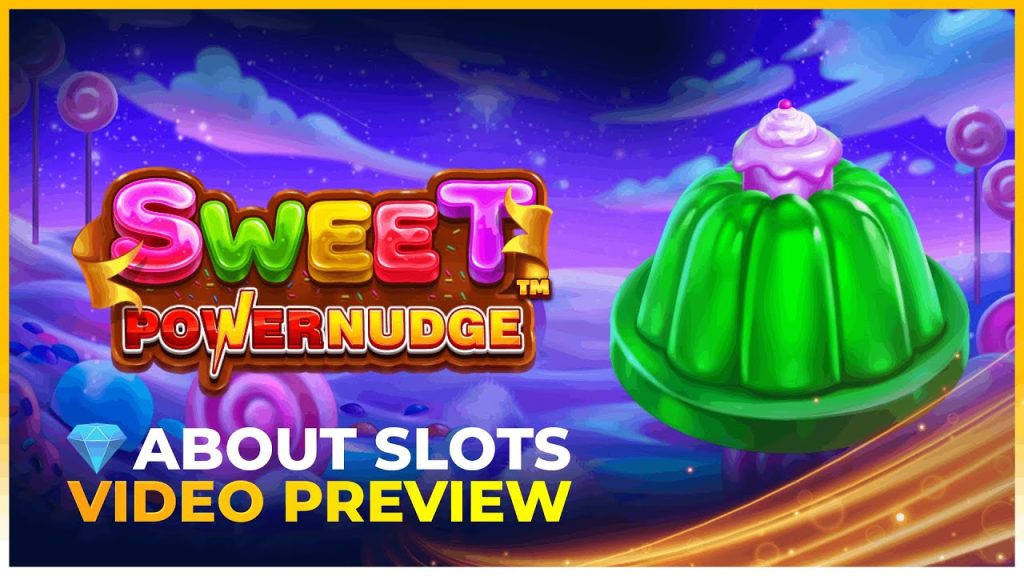 Pragmatic Play introduces its third PowerNudge slot with the aptly-named Sweet PowerNudge. This sweet treat of a game draws you into the colorful world of candy slots, offering an unforgettable sensory experience. With innovative features such as PowerNudge, Multiplier Reel, free spins, and (depending on local regulations) Ante Bet & Feature Buy, this is one of your favorite gaming experiences yet. Get ready for sugary wins when you spin up Sweet PowerNudge.

Sweet PowerNudge’s presentation is pleasant yet unoriginal, as its title implies. The candy icons and pieces of candy in the background add a delightful touch that makes it feel almost chewy. The soundtrack has an uplifting energy, although turning up the bass on your equalizer may give more body and texture to this scene – making it stand out amongst other presentations. Sweet PowerNudge is nice enough but quite overused by now.

Moving back to the story of PowerNudge, we have already seen Goblin Heist and Rise of Giza with their shared grid configurations. Sweet PowerNudge delivers an exciting twist: imagine six reels containing five symbols plus a multiplier reel on the right-hand side. To secure victory, aligning connected blocks consisting of at least five matching symbols in vertical or horizontal patterns is key. With RTP models of 96.08%, 95.01%, and 94.07%, respectively, your chances remain the same no matter how you decide to play: conventionally, with an Ante Bet, or buying free spins. Place your initial bet between 20 p/c to £/€100 per spin – adding an Ante Bet will increase this by 25%. It will double the possibility of winning a feature and give you additional thrills throughout every game session.

Sweet PowerNudge is full of alluring, sugary-looking symbols on the paytable. Starting with J-A icons as the lower pays and progressing to purple, yellow, green, and red treats items as the highs, five matching symbols are worth 0.1 – 1x bet while larger fifteen combos reward up to 100x your wager! Alongside these payouts, there are other options for increases in wins, but unfortunately, no wilds make an appearance at any point during gameplay.

Allow us to start with the star of this show: PowerNudge. When a win is shown on the board, all reels containing winning symbols will nudge down one position while non-winning reels remain unchanged. After that, any wins in view are paid again, and if no more combinations appear after another spin or free spin can begin. The feature finishes once there aren’t any wins present anymore.

Ready for some real potential? This reel boosts your winnings by multiplying them by 1, 2, 3, 4, 5, or 10 times. Normally this feature is unavailable in regular gameplay but can be randomly activated at any point. Every time you nudge a winning combination onto the reels, it’s automatically multiplied with whatever multiplier value appears in the middle position of that spin — and then again after each successive nudge. Once all nudges have been completed on a single spin cycle, the multiplier resets to x1 and becomes inactive until reactivated.

When scatter symbols land on the reels, they are instantly collected. Accumulating four or more of these during base gameplay will trigger the Free Spins bonus round, where seven initial free spins are awarded, with an added 3 for each extra scatter collected beyond 4 – potentially leading to retriggering! During this exciting bonus feature, a multiplier reel will be active throughout its full duration. Finally, let’s talk about the feature buy option, which allows players to purchase free spins for 100 times their bet.

Sweet PowerNudge may not be the most eye-catching game out there, but don’t let its unassuming title fool you. Its collection of candy graphics will keep you captivated long after your initial surprise at seeing such whimsical visuals compared to those found in Goblin Heist PowerNudge and Rise of Giza PowerNudge.Sweet PowerNudge may be a bit cliche since it is not unlike many other places that feature sweets primarily. Still, the classic setup of traditional desserts has been appealing enough to draw people in for years, and this place does not seem any different.

While visuals and audio are important aspects of the game, what truly matters is how it plays. The gameplay, in this case, is good but not particularly captivating. Pragmatic Play has already incorporated a multiplier reel into games such as Hot Safari and Aztec Gems, so they have experience with this mechanism. When it’s active, the overall winnings can be multiplied when randomly activated during regular play or free spins rounds, thus making for an exciting gaming experience. Despite the fact that it may take a good amount of patience to wait through stretches with no activity, Sweet PowerNudge offers features and payouts mechanics capable of compounding off one another. With its staggering maximum win potential of 5,000 times your bet size, there are sure to be some thrilling snowballing moments too.

Following the two previous PowerNudge games, which were impressively creative, it was a bit of a letdown to witness Pragmatic Play use such a common game theme. Despite that, candy-themed slots are widely sought after – especially from Pragmatic Play’s production line. Thus, this cozy game world might allow this PowerNudge slot to stand out and become successful or pass as something you spin once in a while but wouldn’t return for another go around. Only time will tell.