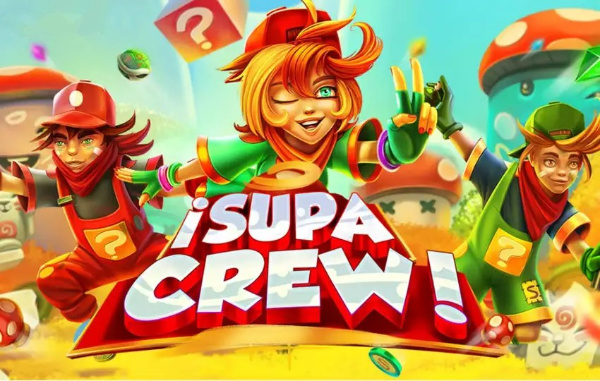 Supa Crew will be ELYSIUM Studios’ first online slot, and it will have a design with vivid colors and plenty of animations. It uses numerous characters and crystals for its symbols, as well as several items that appear to have a Japanese influence, in a way that reminds me of modern arcade games. Below is further information on how it works.

Supa Crew features only 10 paylines and 5×3 reels. It’s not the sort to pay out a lot, with the top rounds paying up to 500x the stake, but it does have medium volatility and a 96.06 percent RTP. The 3×3 mega symbols, the Supa Crew Brothers respins, and enormous multipliers are among the major features we can expect from it.

Your wagers will start at $0.30, but they will only increase from there, allowing you to pay up to $50 on a single spin.

In terms of the potential payouts, 500x the bet isn’t a lot for a modern slot machine. The game’s advantage is that its volatility is only rated as medium, yet even at that level of risk, most competitors will give you better payouts. The fact that the RTP is a healthy 96.06 percent is confirmation that Supa Crew is doing the right thing, even if the benefits aren’t quite what I’d like.

This game can be played with up to ten lines, although the combinations are much easier to form than you might think. All you need is three matching symbols to line up, even if they’re on opposite ends of the line or in the centre.

The Coin sign appears on the reels and can spin to reveal random symbols, depicting one of the Supa Crew members.

There’s also a Mega Coin variant, which takes up 3×3 spaces and contains 9 mystery symbols. They function in the same way, except they provide you with a greater number of matching symbols at once. With these giant coins, all lines get three matching symbols, ensuring that the wins are guaranteed.

There is also a multiplier symbol, which takes up 2×2 slots and spins to offer you a high multiplier.

The Supa Crew Brothers provide the last feature. These can occur and give you a second chance to spin the Coin for a better symbol than the one you received the first time.

The design of Supa Crew is fantastic, albeit it isn’t always visible in the slot’s symbols. There are two brothers that can appear adjacent to the reels, as well as a girl who can appear in the mystery symbol. Otherwise, premium symbols such as stars, turtle shells, toadstools, and bombs are available. Five colored crystals make up the low symbols.

Supa Crew is a decent game, with a high-enough RTP and only minor volatility. It’s enjoyable to play and simple on the eyes. Its distinct characteristics are a clear plus, but the low prize may deter some gamers.