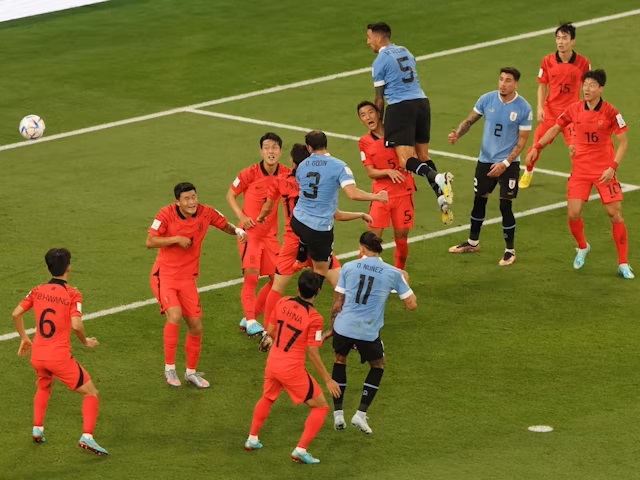 When Ghana travels to the Education City Stadium to play South Korea on Monday, they risk being eliminated early from Group H of the 2022 World Cup.

On the first day, the Asian rivals impressively held Uruguay to a scoreless tie while the Black Stars suffered a heartbreaking loss to Portugal.

On the opening day of the 2022 World Cup, there were a total of four ties. South Korea put out a valiant effort in their draw with Uruguay, however the woodwork did save them on a few occasions.

Paulo Bento’s team held on for a point against their South American opponents, displaying their defensive resiliency that was also present in their most recent games prior to Qatar. Federico Valverde and Diego Godin both saw shots crash off the goal frame.

After matchday one, there is no way for South Korea and Uruguay to be separated by points, goals, or fair play points,Bbu a win over Ghana, the former team expects to significantly increase their chances of placing in the top two and move closer to the knockout round for the first time since 2010.

The Tigers of Asia, who avoided defeat in their initial match, enter their match against Ghana with only one loss in their previous 10 games across all competitions, and their defense, which is coached by Kim Min-jae, has kept three consecutive clean sheets during a four-game unbeaten streak.

Even though they were excellent in the defensive third, South Korea failed to register a shot on goal during the Uruguay draw for the second time in four World Cup games, and Ghana undoubtedly had some experience holding teams at bay during the run-up to Qatar.

Portugal easily broke Ghana’s previous defensive fortitude, but they showed enough of attacking skill on the other end and shouldn’t have any trouble challenging this South Korean defense.

Bento’s team, though, established their worth against Uruguay, and we can only see a fiercely contested match that ends in both teams sharing the points.