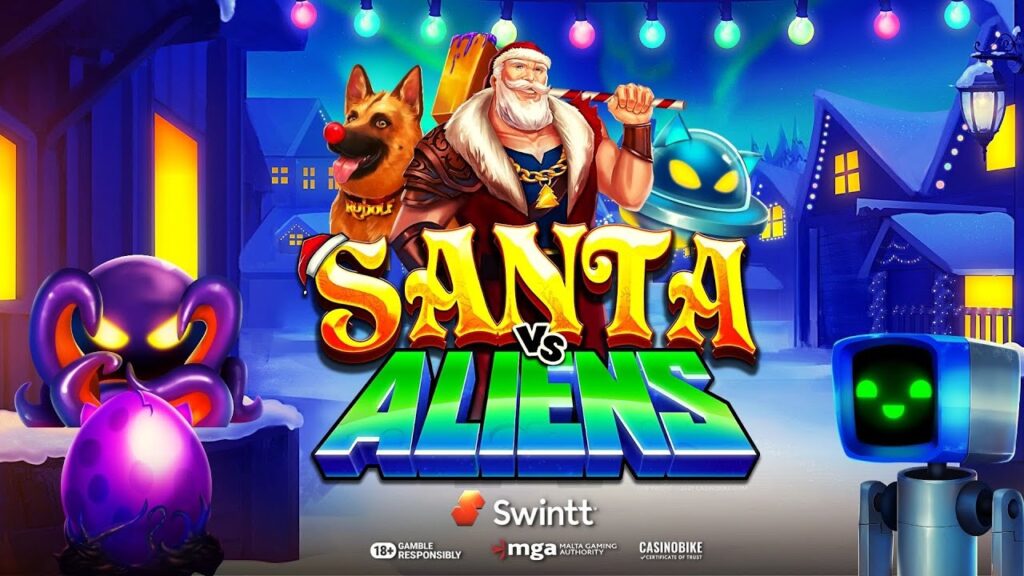 Developers begin creating their own versions of a Christmas or New Year’s Eve themed slot machine as the end of the year approaches. With Santa vs Aliens, Swintt has created one of the most unique views on the holidays to date. This new film will pit a Santa who looks like he’s linked to Thor and has a lot of muscle against a horde of extraterrestrial invaders. It’s a nice one to look at in the coming weeks, with good graphics and a real RTP.

The Santa versus Aliens slot machine has 20 paylines and 5×3 reels. It maintains a high enough RTP of 96.03 percent while paying very little, up to 200x the stake for a screen covered in wilds. Sticky wilds, expanding wilds, scatters, and free spins are among the features.

Santa vs Aliens Prizes and Betting

For a single spin, Santa vs Aliens can pay up to 200x the stake. Because there are free spins with growing wilds to look forward to, the slot’s potential is much larger, but the paytable makes no note of it.

Since the RTP is 96.03 percent, I’d say it’s doing okay in terms of fairness.

The image of Santa is always present on the reels, sticking in the middle of the third one, which is one of the game’s unique features. It can be quite useful when putting together fresh combos. It pays the most on its alone, up to 200 credits for a full combo.

It can change other symbols into extra wilds at any time, whether they are on the first two or last two reels. During free spins, the new wilds will expand and take over the reels.

Finally, you want to be able to access a more substantial feature, which is the Wheel bonus. This one requires 3 or more Alien scatters to be activated. When the Wheel spins, it can award 5 to 20 free spins or a cash jackpot worth 10 to 100 times the wager.

The most appealing aspect of this game is its theme. Santa Claus is a character we’ve seen in slot machines before, but not quite like this. Santa, a guy with a lot of muscle rather than a bloated belly, looks a lot like Thor, especially since he’s clutching a hammer. The action takes place against the backdrop of a snow-covered village, yet the story is about an alien invasion.

The list begins with the image of Santa for the wild and the Alien for the scatter, and then moves on to the regulars. A Star, a German Shepherd, an Alien UFO, a Friendly Robot, an Alien Egg, a Shotgun & Axe, a Ray Gun, a Booby-Trapped Gift, an Alien Planet, a Bell, and a Bomb-shaped ornament are among them.

Santa vs Aliens is one of the more memorable holiday releases I’ve seen. The concept of an extraterrestrial invasion that Santa is fighting is original, and the execution is excellent.