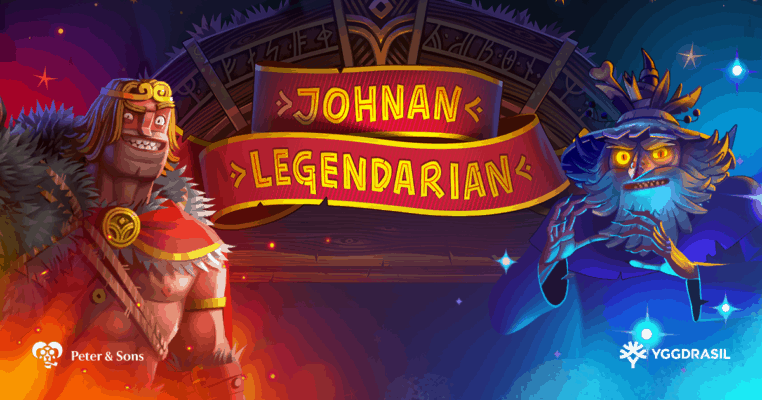 The story of Johnan Legendarian takes us through time to the era in which a barbarian by the name of Johnan lived. This brand-new slot game, which Peter & Sons and Yggdrasil Gaming collaborated on, tells the story of his valiant deeds and battles with the legendary beasts that roamed that lived in those early time. Although it doesn’t seem like it, this game is based on the Book of Ra genre, where we’ve seen many clones. However, this game seems to do some things differently.

Such games usually include a setup with five reels and 10 active lines. The payouts are as promised, reaching 5,000 times the stake while maintaining a high volatility level and an RTP of 96.03%. The mixed/scatter icons, free spins with expanding symbols, and a Super Free Spins option will all be Major Features.

The maximum payoff that Johnan Legendarian can offer—5,000 times the stake—is actually considered as the norm for a slot machine in the Ra-style. However, it appears that 90% of them remain at the same level with their best reward. Some may offer less, while others may go higher.

RTP in this instance is also decent at 96.03%. On the other side, volatility will increase to high levels, earning the game a rating of 9 out of 10.

In this instance, mixed wild/scatter symbols will bring the majority of the action. They show the game’s villain, a character who resembles a scarecrow. You gain 10 free spins whenever at least three of these appear on the reels during a spin. The major drawback of the feature is that it resets the number of free spins to 10 each time it is retriggered.

One of the regular symbols will be chosen to expand on its reels before the free spins begin. If there are three or more special symbols on the reels after each spin, they expand and form winning combos on the 10 lines even if they are not consecutively aligned. They essentially pay as scatters, which is good, especially for the positions with the highest payouts.

If the bonus spins do retrigger, the game adds randomly chosen special symbol and the rounds are reset to 10.

Super Free Spins are the ones that seem unique in compared to other Book of Ra clones, but they are quite difficult to get and, if activated, don’t seem to be as powerful as they need to be. When there are two scatter symbols on the reels, they are collected and award two points. To get 10 Super Free Spins, you must collect 770 points over a very long period of time, most likely.

The only difference is that the Super Free Spins reset the amount of rounds in addition to adding 10 extra spins to the total when they retrigger.

I liked how Johnan Legendarian has a interesting theme and a beautiful design. In Book-style slots, where the Ancient Egypt theme is typically preferred, this combination is rare. It’s a game that stands out in the category just based on design, and I’d put it on par with what Ygdrasil often releases (this is a partner game from Peter & Sons).

When it comes to its symbols, the Scarecrow serves as both a wild and a scatter on the reels along with images of a rhino and a bull, a sword, and a bow and arrow. The 10 to A Royals are on the five lesser symbols.

The Book of Ra-inspired Johnan Legendarian slot might not be particularly original, but the developers have made some changes to make it their own. The fact that the free spins were reset rather than more rounds were something I didn’t enjoy because it may get annoying. However, I believe you will like the graphics and enjoy the change in them.