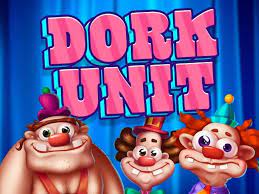 Remember when being a nerd was a negative thing, then it kind of became cool, then certain tech experts ruined it for some, then, wait, did being a nerd come back into being cool again? Not sure; it’s challenging to remain current with popular opinion. Anyhow, maybe Dork Unit from Hacksaw Gaming may aid in our decision-making. An eye-catching, vibrant online slot machine called Dork Unit is packed with wild multiplier Gift Boxes, Gift Bonanzas, and a Dork Spins extra round that features full reel wild multipliers.

A 5-reel, 4-row game grid is used to play Dork Unit, and there are 16 paylines that run the length of the panel. The volatility of Dork Unit has been classified as medium (3 out of 5), a little lower than average, and its math model generates a maximum RTP of 96.24 percent when playing in the default mode. Be careful that there are models with lesser returns. The stake options for this game range from 10 cents to £/€100 each spin, and it is playable on all types of devices.

Tiny Timmy, Hefty Hector, and Long Lenny are the names of the three dummies in the story. They won’t appear frequently until Dork Spins are triggered or purchased. The Gift Bonanza feature and multiplier wild Gift Box symbols are additional drawcards in Dork Unit.

Gift Boxes, which appear on any reel in the base game in one of three variations, are wild multiplier symbols. Values for standard gift boxes are x2, x3, or x4. While Epic Gift Boxes hold values of x25, x50, x75, x100, x150, or x200, Rare Gift Boxes have values of x5, x10, x15, or x20. Gift boxes can be utilised in place of any pay symbol, and when they do so, a win is worth more because of its multiplier. When more than one Gift Box contributes to a win, the contributions are tallied together and then deducted from the prize money. Gift Boxes in full lines pay out 10 times the stake.

The Gift Bonanza feature is activated when three gift boxes land on a single spin. Three spins are given when Triggering Gift Boxes become stuck. New Gift Boxes turn sticky and reset the spins to 3. When all of the spins have been spent, the feature comes to a conclusion and wins are paid out for each spin.

The free spins scatter symbol is a clown by the name of Lenny, and landing three of him awards 10 extra Dork Spins. If Lenny appears during the bonus round on reels 2, 3, or 4, he transforms that reel into a wild Dork Reel for the remainder of the feature. Stackable wilds with a multiplier, or “Dork Reels,” depending on which Dork lands on them.

Loading up Dork Unit was like tripping over at the grocery store and falling face-first into a pick ‘n’ mix candy bin after wading through many hefty as it gets slots from Hacksaw such as Hands of Anubis and Itero. Despite not having a candy motif, Dork Unit has the same chunky, brightly coloured aesthetic. Additionally, the soundtrack fits the silly theme, giving Dork Unit the appearance of a children’s television programme from the 1970s. Something resembling Sesame Street, yet not exactly.

For a Hacksaw Gaming slot, Dork Unit was remarkably timid. It has a beautiful innocence about it, and since this is Hacksaw, multipliers may occasionally produce amazing moments. However, it did have the air of a game that served as a mental cleanser before the company refocused on making something ominous, dreary, and menacing to frighten gamers.