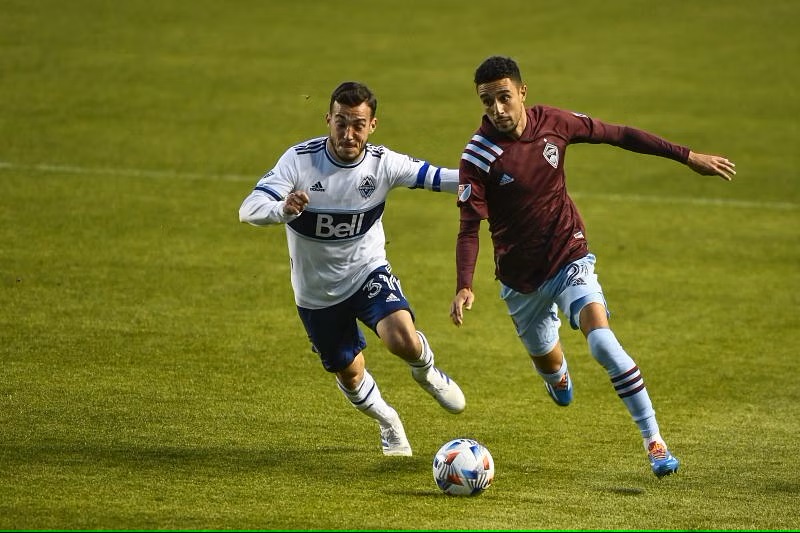 On Saturday, the Colorado Rapids and Vancouver Whitecaps will play against each other at Dick’s sporting Goods park, with only five matches left in their Major League Soccer regular season.

The Vancouver Whitecaps have eight points to make up after last week’s 2-0 loss to the San Jose Earthquakes, while the Burgundy Boys have six straight losses and are nine points out of the Western Conference playoff picture. As a result, there is a chance that these two playoff teams from 2021 won’t make the postseason this year.

Colorado has been terribly disappointing all season, scoring just once in their last three games, a year after being the best regular season team in the fiercely contested Western Conference.

The Rapids, who are currently on their longest losing streak under Robin Fraser, struggled to create many chances against DC United and were unable to score against the league’s worst goal-conceding defense (59).

There were a lot of uncertainties concerning the source of the Rapids’ goals heading into the 2022 campaign.

Although no one could have imagined they would have as many terrible defensive performances as we have seen this year, with Colorado conceding three or more goals in 10 separate games, it continues to be an issue that has plagued this squad.

With only one shutout in their last nine games, they have already given up 15 more goals this season (50) than they did in 2021.

In Commerce City, where the Burgundy Boys are unbeaten in five straight domestic games and have recorded six of their seven clean sheets this season, three of their final five regular-season games will be played at high altitude.

Colorado has not won in their past four games after giving up the first goal, dropping their most recent two contests by combined scores of 10-1 against Nashville SC and the Philadelphia Union.On Vancouver’s Pacific side, it seems like Whitecaps manager Vanni Sartini could be a touch short on miracles this year.

The Caps lost just two of their final 14 regular-season games in 2021, qualifying for the postseason for the first time since 2017. The Italian coach was instrumental in this team’s turnaround.

This squad was actually in a playoff spot going into their final MLS match last month, but since then, they have lost their attacking spark, scoring zero goals in back-to-back matches as time is running out to try to catch three teams and advance.

The Whitecaps have lost their last six domestic road games and haven’t scored in four of their away games this season going into this weekend.

Vancouver has lost only twice all season while trailing 1-0 after giving up the first goal in four of their previous five games.

In order to maintain their tenuous playoff prospects, they must perform well in their final five regular-season games against opponents who are currently ahead of them in the Western Conference standings.