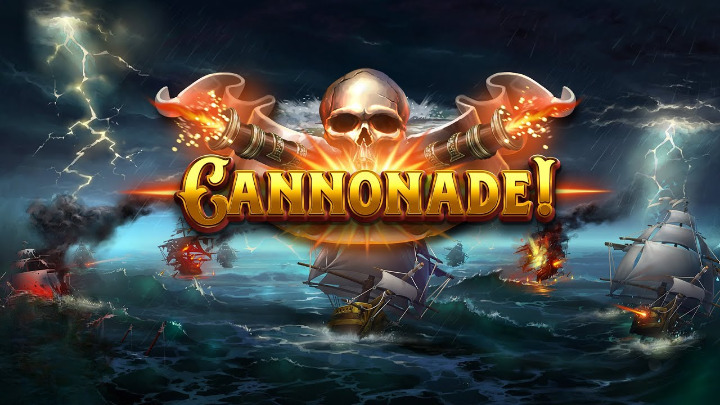 Cannonade is a slot from Yggdrasil Gaming software developers. The developer with experience crafting piraty or high seas slots like Pirates 2: Mutiny has introduced some changes to the slot. In this slot, ships sail in deep waters and end up in a gunfire fight where they let rip with every cannon on board.

As the cannon balls fly around in any direction and wooden planks break, noise is also produced, which is scary. The terrifying scene happens when the ship sinks, leaving players wishing for a rescue team to salvage the whole situation. But is this what the Cannonade slot is all about? Read on to confirm all these.

The cannonade slot has a grid with 6 reels and five rows. As the base game begins, only half of the reel positions are active, while blocker tiles cover the remaining half. However, the inactive reel positions unblock when the winning ways land.

The remaining part of the base game involves ships floating on the water under an ominous dark cloudy sky. This changes to a ray of bright sunshine or sunset on the horizon, like in a turner painting. Since it’s playable on any device, players can bet anytime. But that is after placing a bet of between 20 p/c and 20 euros per spin.

Alternatively, a player can activate the golden bet, which increases the bet by 50% with additional scatter symbols on the reels improving chances of triggering free spins. A player can also play this game by buying free spins.

The Cannonade slot has an RTP of 96% but has lower models. It’s a highly volatile game that is classified as ‘super high.’ Additionally, it has 120 ways to win, which can increase to 7,776 after all the positions are unlocked.

For a player to win, they have to land matching symbols on adjacent reels starting from the leftmost reels. Moreover, the Cannonade slot has ten pay symbols. The low pay symbols are the axes, rifles, pistols, cannons, and rifles worth 0.2-0.3x the bet for a five-of-a-kind. The high pay symbols are the four seafaring symbols worth 0.4-2x the bet for a five-of-a-kind. But this slot doesn’t have wild symbols.

The unlocked symbols then respin, and if new winning symbols hit, they are locked up too. Then the blocked position is removed from the reels, and another respin occurs. This will happen until no new winning symbols occur and the total win value is calculated.

Landing 3,4 or 5 scatter symbols on a spin round is worth 6, 9, or 12 free spins, respectively. Before the free spins round begins, a player can bet them to earn more or collect value awarded to go to the right feature. To bet, a player needs to use the red or green segmented wheel spins.

If a player lands free spins on the green segment, it rewards them with three or more free spins, while the red side makes them lose all the free spins. But the win streak remains active during this feature while the same base game rules apply here. However, when a player lands a scatter symbol, it earns them +1 free spin while the lowest paying symbol is removed from the reels.

The Cannonade slot has two bonus buy options. The first one is worth 100x the bet and gives players six free spins. The other one is 500x the bet for 15 free spins.

Cannonade slot is another slot like the Jack Hammer and Long Pao or Blue Fortune that uses the streak wins sticky win concept. It doesn’t rely on the mechanic fully to do various things but majors on the sticking winning symbols and respin process. The game also included the maritime setting, which comes out clearly. But some changes happen after the salty danger sensation.

The developer of this slot has harmoniously used the win streaks and the blocker tile removal element to clear ways for new symbols. When this happens, the winning ways increase, enabling the players to earn more. What’s good about this slot is it has more winning ways than the other competing slots within its range.

The possibility of removing the low-paying symbols from the reels increases the chances of landing high-value symbol wins. Since this slot has a high maximum win of 20,000x the bet, it enables players to get more rewards.

These features show that the Cannonade slot is a decent game for all players. However, it doesn’t meet the standards of some of the slots from the same developer, like Calavera Crush, despite being a different type of game. But it includes more innovations and great features worth any player’s time and money.