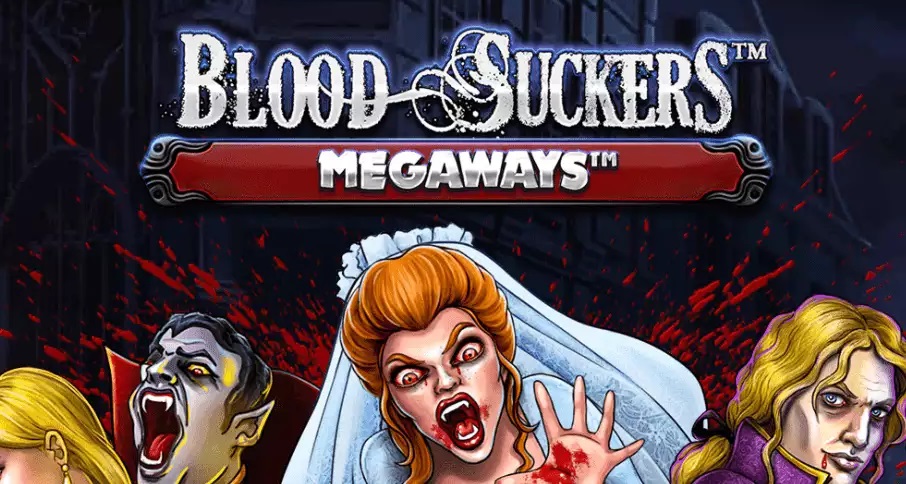 Red Tiger’s Blood Suckers Megaways is a horror-themed online slot game that builds upon the previous two games in the trilogy, Blood Suckers (2013) and Blood Suckers 2 (2017) from NetEnt. The game uses the Megaways game engine developed by Big Time Gaming, which adds even more excitement with features like chain reactions, free spins with coffin picks, random wilds, super wilds, and wins multipliers. Get ready to face off against vampires and other terrifying creatures as you spin the reels and try to win big prizes. Be sure to sharpen your stakes, crush some garlic, and fasten your crucifix before you start playing.

Blood Suckers Megaways is the latest addition to the Blood Suckers series of online slot games, known for their high return to player (RTP) rates. The game is visually similar to the original Blood Suckers, with spooky background imagery and symbols that give it a light-hearted feel. However, the moody setting and horror themes also create a sense of uncertainty and tension, leaving it unclear whether the game is joking around with horror or if something more sinister is at play. The game follows in the footsteps of the original Blood Suckers and its sequel, which featured a female vampire hunter.

Blood Suckers Megaways is a highly volatile online slot game with the potential for big wins, offering a maximum return value of 97.66% when playing regularly and 97.73% when buying free spins. The game’s math model is designed to be highly volatile, and players can win up to 20,521 times their base bet of 10 p/c to £/€4 per paid spin on any device. Blood Suckers Megaways is known for its high return to player (RTP) rate, coming close to the original Blood Suckers’ RTP of 98%.

The game is played on a 6-reel grid with the Megaways game engine, which allows for 324 to 117,649 ways to win, depending on the number of icons on each reel. The game features a chain reactions mechanic where winning symbols are removed from the reels, and new characters fall to replace them, potentially creating more wins. Players need at least three identical symbols on three consecutive reels to form a win starting from the leftmost reel. The value of the success depends on the symbol, with garlic cloves, crossbows, daggers, holy items, and flasks paying 0.4 to 0.6 times the bet, and the five character high pays to award 0.8 to 3 times the bet. The game also includes wild symbols that can substitute for regular pay symbols, including regular 1×1 wilds and full reel Super Wilds.

Blood Suckers Megaways is packed with bonuses and features, including four base game modifiers and free spins with a pre-round of feature picks. This online slot game is loaded with goodies, much like a vampire hunter’s bag of tools and weapons used to take on Nosferatu.

During any base game spin, a Feature Coffin may appear on the screen, offering one of the following modifiers when the vampire is defeated,

The punter will receive five free spins if at least three scatter symbols land. Each scatters symbol that triggered the feature will also grant the player one pick in the picker bonus before the free spins begin, with a maximum of five picks. In the picker bonus, the player can click to open coffins and reveal their reward once they have defeated the vampire. During the free spins feature in this game, you may uncover some special symbols hidden in the coffins.

These include Random Wilds, which add 2-5 wild symbols to the reels on each spin, Super Wilds, which add a special wild symbol to the reels on each spin, Bonus Spins, which add 1, 2, or 3 extra free spins, and Wins Multipliers, which multiply your winnings by 2, 3, or 5. If you uncover more than one multiplier, the values will be combined to increase your winnings even more. You may randomly trigger one of the four rewards, even if you have not picked all the associated coffins. For example, if you have not selected all of the Random Wilds coffins, you may still randomly trigger the Random Wilds reward during the free spins. It is also worth noting that the multiplier has a maximum value of x10.

In this game, players can purchase a Feature Coffin, which allows them to access free spins with a certain number of guaranteed picks. The number of picks available for purchase includes 3, 4, or 5, and each option costs 10x, 150x, 500x, or 1,000x the bet, respectively. This feature allows players to potentially increase their chances of triggering one of the four rewards during the free spins feature.

Blood Suckers Megaways is a slot game that combines elements of horror and Eurovision-style theater to create a unique and entertaining experience. Developed by Red Tiger, the game builds upon the classic NetEnt game Gonzo’s Quest by incorporating the Megaways mechanic and modern touches. The result is a slot that pays homage to its predecessors while pushing the action forward with innovative features.

It comes as a delightful slot game that successfully blends its horror-themed elements with many exciting features and modifiers. The game does not detract from the original Blood Suckers game but builds upon it and pushes the franchise forward. It also boasts a high return to player (RTP) and the potential for massive winnings of up to 20,521.9x the bet. Overall, Blood Suckers Megaways is a solid addition to the franchise.

To conclude, if you enjoyed games like the original Blood Suckers slots or Immortal Romance, you should give Blood Suckers Megaways a try to see how it has been updated. Even players unfamiliar with the franchise can still enjoy this online slot’s exciting presentation and gameplay, which only really “sucks” in the best way possible through its vampire characters.