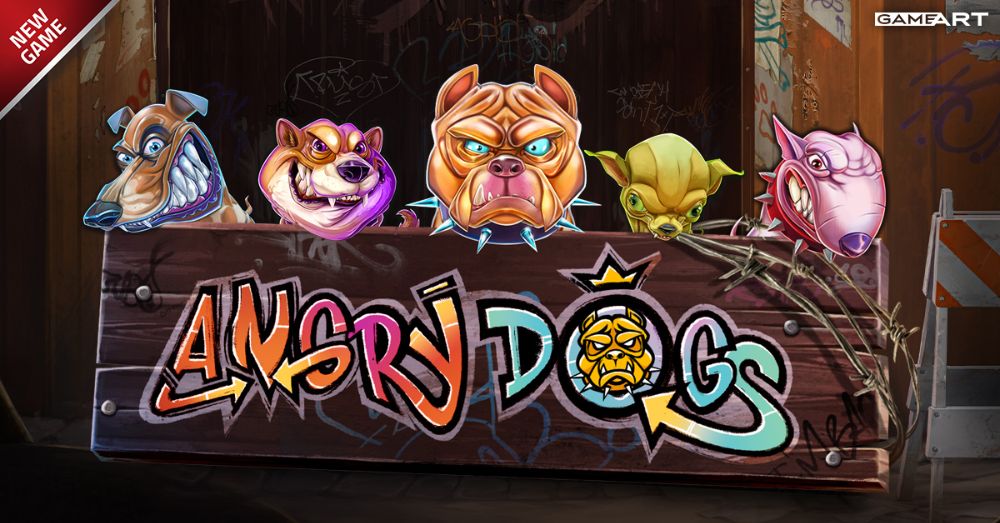 The action in Angry Dogs takes place in an urban area, as demonstrated by the prevalence of graffiti on the walls. This will be one of GameArt’s new slots, which will be available in the next weeks. It doesn’t appear to be the nicest of slot machines, with two dogs baring their teeth at the player, but I trust GameArt to tell a good story in this one.

With 25 win lines and 5×4 reels, there was plenty of space for more ways to win, but I discovered that Angry Dogs did quite well. It’s possible to win up to 50,000x your wager, a number at which even the most seasoned players would want to know what’s going on. The RTP is also good, with a long-term return of 96.36 percent projected. The Golden Reveal, Mystery Doghouse, a bonus game, free spins, and a Posters Pick Up are just a few of the major features.

In this example, bets will begin at $0.25 and might potentially reach a maximum of $100.

Angry Dogs can be extremely lucrative, and GameArt makes it a point to promote it on the main screen. Up to 50,000 times your wager might be returned to you, but you’d have to be extraordinarily lucky to strike it. Because the RTP is already above average at 96.36 percent, it was also utilised.

The Mystery Doghouse is one of its features, and it will use stacked symbols that can cover full reels. It activates the Reveal Feature, revealing either Golden Bulldogs or paying symbols in the Mystery spots.

If you obtain Golden Bulldogs in those areas, you’ll get a Golden Reveal, where each symbol will either bring you a scatter or a bet multiplier (up to 2,500x multipliers possible).

You’ll earn a bonus game if you manage to get three or more Dog Collar scatters on the reels. You can get the Beware of Dogs Free Games here, but you must first complete the Posters Pick Up bonus.

Pick One of the Three Posters: You choose one of the three posters displayed to learn what multiplier is in effect during the free spins (up to 10x possible).

Pick One of the Three Posters: You choose one of the three posters displayed to learn what multiplier is in effect during the free spins (up to 10x possible).

When the Beware of Dogs Free Games feature begins, the Mystery Doghouse symbols appear throughout the entire 2nd and 4th reels, at least for the first round. There’s also the previous stage’s multiplier of up to 10x, which is ready to be applied to winners. After each round, it will increase by a factor of one. The amount of free spins is not fixed; they will continue as long as Mystery Doghouse symbols are present. Until the Doghouse emblems are removed, special symbols will be employed to shove them up one spot.

Wilds will also appear, ready to act as replacements or to construct their own winning combinations. They can pay up to 40 times your stake.

Back lanes, hidden behind buildings, with a lot of graffiti on the walls are depicted in the design. The icons on the reels are four angry-looking dogs at premium places and four different sorts of snacks in lower positions. It’s a nice-looking design, so that’s something to enjoy.

Because it will be extremely volatile, Angry Dogs promises to be a superb online slot for an experienced player. However, the 50,000x prize makes it all worthwhile.