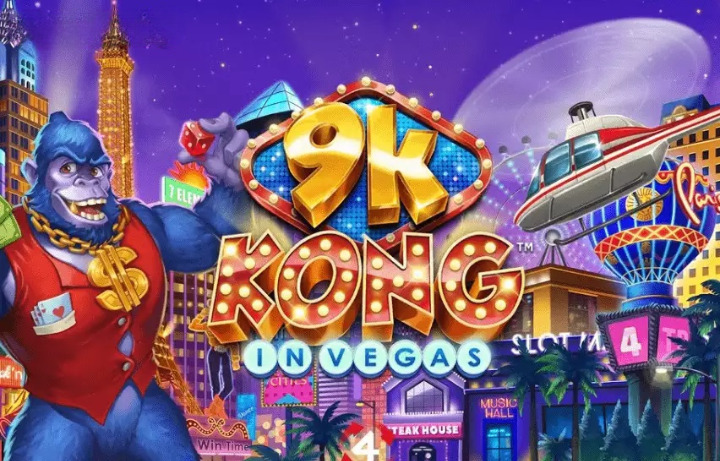 King Kong is a narrative that will remind you of the great new York city. However, things changed this time as the mighty 9K Kong headed to Las Vegas. The developers of this slot, 4ThePlayer, did some magic and came up with this slot that has excellent features. It comprises free spins with a high win repeater feature and a Big Win repeater. But how good are these features? Continue reading to find out more.

One of the unique things about this game is the ape (Kong) with a colossal gold chain symbolizing good luck. Kong moves from side to side on the grid with a lot of force while looking keenly. Moreover, strip icons, flashing lights, neon, and signage make the slot visually appealing. The game also imitates the Dinopolis look with some Tropicool features. Additionally, the soundtrack is lively and gives players an el lobby-like feeling, which throws them off their feet into the crazy Sin City Style.

9K Kong in Vegas takes place on a grid with five reels and five rows. Additionally, it has 1024 paylines, and the game is highly volatile. The game RTP is 96% which enables players to play in the default way or buy any of the features. The bet ranges from 40 p/c to 70 euros per spin. But this increases by 50% if the Xtra Bet is active.

For a player to win, they should land matching symbols in adjacent reels beginning from the first reel on the left. 9K Kong in Vegas has 11 pay symbols, each worth a value. This includes low pay and low pay. The symbols include clubs, diamonds, hearts, spades, chips, dice, cocktails, bananas, flamingos, dinosaurs, and Kong. Note these symbols are in ascending order.

If a player lands a five-of-a-kind winning combination, it will be worth 1 to 4.5 times the stake. The 9K Kong in Vegas also has wild symbols (Kong wild), which can substitute any paying symbol.

The features of 9K Kong in Vegas are the big win repeater, buy feature option, and free spins with free spins repeater.

Let’s have a look at each of them;

It can land on a repeat win that rewards the original amount and then makes the wheel respin. This can go on for some time until the wheel stops collecting. After that, the player gets the total wins and ends the feature.

If a player lands three scatter symbols on a reel, it will be equivalent to 10 free spins. But the free spins in this slot use the highest win repeater concept. This means a player’s highest win is saved in the highest win panel. After that, the wins that will collect on the reels will be added to those with the highest win value and awarded to the player.

Every player can buy two features. The buy feature is spinning that are worth a win that’s ten times the bet. This will trigger the big win repeater for 50 times the bet or free spins worth 85 times the bet.

Even though the 9K Kong in Vegas slot has a way of reminding players of the past, the developers ensured it includes impressive wins. The slot doesn’t give players a hard time deciding whether to spin the big win repeater or not. This is because if the feature spins, a player should either collect or add more coins to the pile.

Kong climbs the building for every wheel spin or free spin round. This can be slow for some players, especially those who like slots with a fast pace. But the actions unfold in the quasi-animated film manner are appealing.

The features of this slot will also help the players decide if it’s worth their time. For example, the win repeater is well-balanced despite having a low hit rate. This slot has a maximum win of 9,216x the bet, and it has the capability of swinging throughout the grid.

The great visuals and soundtracks are also worthwhile as it keeps players entertained. However, the developers have brought in something new to the table since most features are not a repeat. The theme and presentation of 9K Kong in Vegas are also not an imitation as they try to bring something new. This shows that the 4ThePlayers is a creative team willing to give players a unique experience.